Having been raised with domestic cats as pets I have developed a strong connection to the feline and have been lucky enough to be owned by a few cat familiars.  My first familiar* came to my attention in my late teens when I originally became interested in Wicca and I set up my altar.  My ginger tabby Hoody would love to jump onto the altar and absorb the energies raised upon it, even though on occasion he would singe the end of his tail on the candles lit upon it.  Hoody would accompany me or keep watch over me whilst I performed spells and rituals. When I would cast circle he would actually be able to discern where the invisible boundary of the circle was and would dutifully pace the boundary in a stance of protection and once the ritual had started he would sit sphinx position outside the boundary facing in and watch over me.  This led me to find out more about cats and the role they have played in magick and not surprisingly they are considered a magickal and sacred animal from Ancient Egypt to the modern witch.

Cats were believed magickal and sacred in various cultures around the world.  In Ancient China, Ii-Shou the god of the gathered crops took the form of a cat to protect the harvest. In Japan the Emperor Ichijo found 5 kittens in his palace during the 10th day of the 5th moon which was an auspicious day and thereafter cats were considered good luck and images were placed in temples, businesses and homes. In Ancient Rome cats were sacred to the Goddess Diana and were seen as guardians and protectors of the home whilst also being a symbol of domestic virtuousness. In Norse mythology the fertility Goddess Freyja’s chariot is drawn by cats and they are believed to be a blessing with respects to procreation and newborns.

Its often speculated that the Priests of Ancient Egypt were the first to domesticate wild cats whom they fed temple scraps to. Images of the cat in Ancient Egypt can be traced as far back as 2600BCE which shows the longevity of their interaction with humans.  Cats were mummified and placed in tombs which showed they were greatly loved and valued by their owners who would also shave their eyebrows in an act of deep mourning. Cats were so revered in Ancient Egypt that harming a cat was a crime punishable by death.

The Egyptian Goddess Bast was originally a lion headed goddess but her image eventually morphed into a cat headed goddess due to the sacredness the Ancient Egyptians held them in.  Bast was the daughter of the sun god Ra and the daughter of mistress of magick, Isis and one of Bast’s titles was “Rage of the Eye of Ra” and Bast’s name itself means soul of Isis – Ba-En-Auset.  Some myths describe her as the daughter of the God of the Underworld, Osiris instead of Ra and thus her role also includes Mistress of the Dead.

Bast’s symbols are the sistrum (a dancing rattle) and as such Bast is attributed with dance, music, love, sexuality and pleasure which gives her connections to Hathor.  Another symbol was a basket which represents the womb of life and as such Bast is ascribed as the goddess of fertility, motherhood and the underworld. Lastly another sacred symbol to Bast is the aegis, a shield like ornament and with that association Bast is credited with war and protection. Adorned in red, the symbol of motherhood and as a daughter of the sun god Ra, Bast oversaw the growth of the crops in the fields and was a representative of the sun.  Being dual natured Bast also was the moon representative of the eye of Horus and her strongly independent nature also classified her as a virgin ie being owned by no man.   The magnificent attributes of Bast strongly correlate with the characteristics of a domestic cat and as such shows their archetypal energies were elevated to the status of “God” thousands of years ago and if you have a cat in your life or been around cats, you know they wouldn’t expect any less.

Originally in British folk lore the black cat was viewed as lucky and was seen as a symbol of the dark night as they could shadow their witches at night time rituals. Black cats are traditionally seen as the witches cat because they were viewed as being able to be able to absorb and carry magick. In many cases cats kept company of people like midwives, herbalists, healers and witches in the middle ages due to their independent yet caring nature which made them perfect companions for solitary practitioners.  During the 16th and 17th century cats whom were seen as familiars of witches were persecuted along with them and so were exterminated in large numbers which decimated their population and increased the rat population which is believed to have caused the plague to spiral out of control during these times.

As a magickal familiar the cat can give a witch warning of psychic attack or spiritual presences by their alert and observant natures.  The cat can be a centred, graceful and calm guide who inspires us to find that within ourselves and it can allow us to channel our magick in a clear and concise way.  The feline familiar teaches us to pay attention and be vigilant with respects to the subtle changes around us which we can work with and which will aid our intuition.  Through the wisdom of the cat’s traits of hunting we can be inspired to explore in search of new possibilities with a cautious yet playful way.  Also the cat’s ability to sit and just be encourages us to do this which allows for self contemplation.  The feline familiar has confidence in themselves which is evident in their graceful walk, constant grooming and “I don’t care what you think” attitude which can in turn encourage us to be confident within ourselves, our bodies and our sexuality.  When we are ill, a cat familiar instinctively knows this and the developed bond will allow them to show they are here for support and this can inspire the same behaviour in us with others.

A cat is not a pack animal and as such doesn’t need a leader and can live an isolated existence with its owner. Fiercely independent and able to confidently display their various moods, cats don’t seek to be ruled.  Their dualistic nature can range from purring loving bundles of fur to predatory hunters who can scratch and bite if threatened which in my opinion is the perfect familiar for those who resonate with those qualities.

A cat has nine lives and it is said that a witch can transform into a cat nine times in their lifetime. The magick of the cat can be used to bewitch, protect, transform, bless, charm and scry and with that said I strongly urge you to connect to these magnificent feline beauties and find what benefits they can bring into your practice.

* Familiar = an animal believed to be possessed of magic powers and has close association with a magickal practitioner. 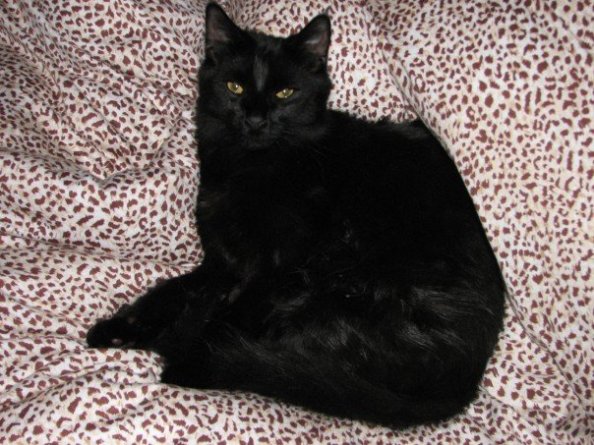 My current feline familiar-  Midnight (maine coon with domestic oriental mix) who was born on Beltane Eve and is one of the witchiest cats I have had the pleasure to be owned by.  The whole time I was writing this article he was constantly by my side rousing me and encouraging me in his own amusing yet magickal way.

The Magical Lore of Cats by Marion Davies

The Enchanted Cat by Ellen Dugan

The Cat in Ancient Egypt by Jaromir Malek

The Cat in Magic by M Oldfield Howey

5 comments on “The Cat In Magick”