In recent months I started watching a new show called “Penny Dreadful”, due to my love of the 19th century English horror genre and having read the books the characters are based on: Dracula, Frankenstein & The Picture of Dorian Gray.

One of the main characters – Vanessa Ives (whom I am assuming at this point is a portrayal of a Victorian spiritualist/occultist) uses a deck of tarot cards specifically created for the show.  Here is Vanessa giving a reading in one of the first few episodes (please note she used two decks in this scene): 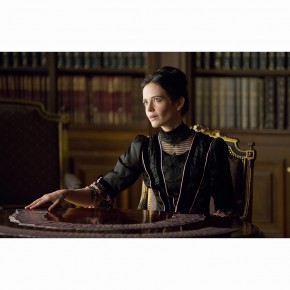 On the screen  they are visually catching due to the stark white outline of the images and purple tinged background,  therefore after watching the second episode, I ordered myself a deck from the Showtime website (http://store.sho.com/detail.php?p=523695&ecid=PRF-SHO-S02183&pa=PRF-SHO-S02183).

When I received the tarot deck, I was a tad disappointed.  This was due to the cards themselves being  quite flat and lifeless due to their graphic design which I’m not a fan of (on the most part).  The card quality itself is also inferior as the cardboard is quite thin and the cards mark easily.  This means they will wear out and corner quite quickly if handled frequently and without delicate care.  Unfortunately I have personally found this seems to be a common occurrence with most tarot cards printed in the last decade or so.

Little information has been provided about the art used and the deck comes with a single instructions card on how to use them with basic and to the point meanings.  If you are looking for a booklet with more detailed symbolic descriptions and meanings of the cards dont bother looking here. With that said there are a plethora of tarot books which go into the specific meanings of each major and minor tarot card you can use in conjunction with this deck. You’ll just have to gloss over the fact that you  just wont know the artist’s reasoning for choosing the images used for the Penny Dreadful tarot deck.

The deck itself can be used for simple three card readings like the information card provides but I wouldn’t suggest using them for more in-depth and complicated spreads.  Specific path working like meditation can be used with them but keep in mind the symbolism is quite dark and ghoulish so be prepared for that.

I reminded myself they were made for a tv series and entertainment purposes so all in all – for me personally, its a good addition to my collection…plus I do love the imagery of some of the cards, specifically The Fool, The Empress, The High Priestess and The Magician.

If you like to collect tarot cards this deck at $14.95US from the Showtime store wont break the bank but for those of you who are ordering outside the USA, keep in mind the cost of international shipping is more and that it will take 2-4 weeks for the deck to arrive. 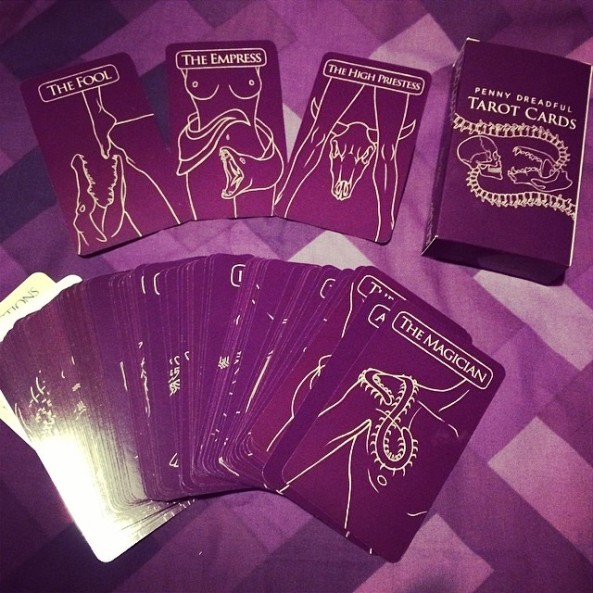 Also as a heads up – there is an app on the Penny Dreadful website you can use for free 3 card tarot readings using the deck in an automated way which you can also get a look at through here: