First part of my post on Rippon Lea is here:
https://setjataset.wordpress.com/2015/08/21/spirit-of-place-rippon-lea-estate-inside-the-mansion/

The grounds of Rippon Lea are immaculately kept and are quite serene and lovely whilst also containing lots of plants and trees which are heritage listed also.

Outside the mansion and on the grounds: 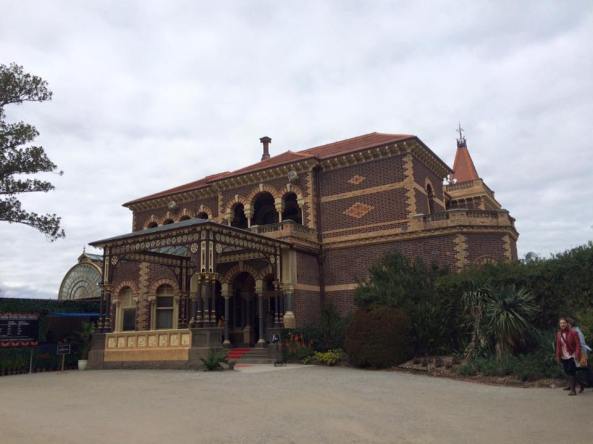 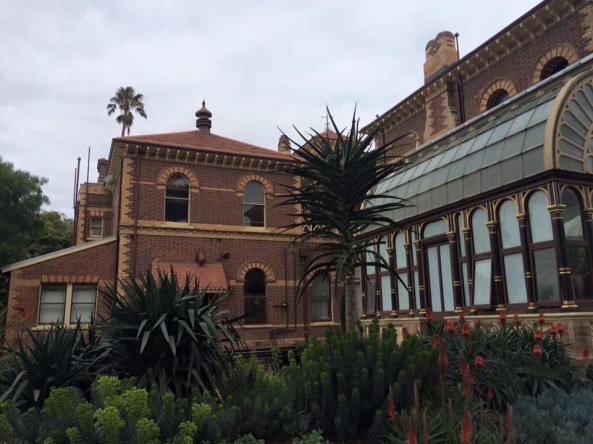 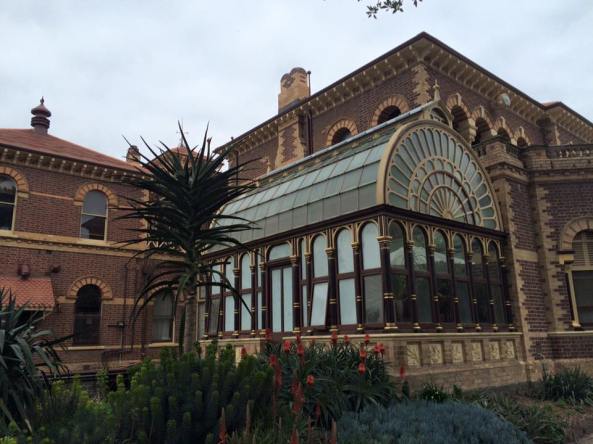 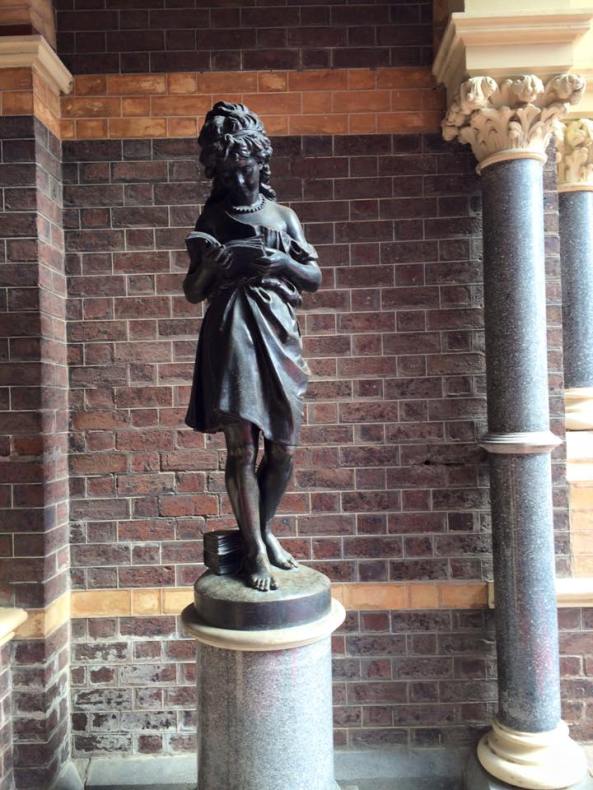 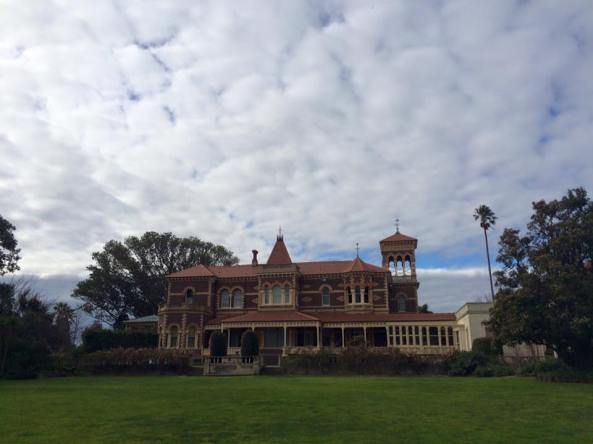 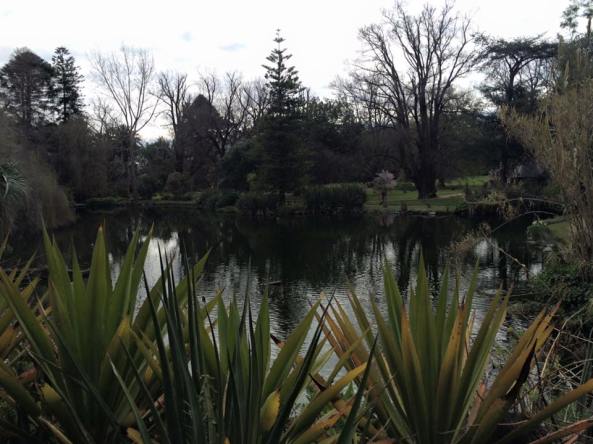 To say I am obsessed with the late 1800’s and early 1900’s is an understatement as I adore the fashion, decor, music and the social graces of life back then. So as a belated birthday gift I spent a few weekends ago at the heritage trust estate called Ripponlea.  I was there to peruse the Miss Fisher costume exhibit (details here: http://missfisherexhibition.com.au/) as some of the scenes for this 1920’s themed tv show was shot there.

Rippon Lea was built in the late 1800’s and was a family home to two families who lived on the estate for over 100 years, until it was donated to the National Trust, to protect it when the last owner passed in the 1970’s.  Its style is in the Victorian Italiante, which was popular during the gold rush boom happening in the state at its construction. 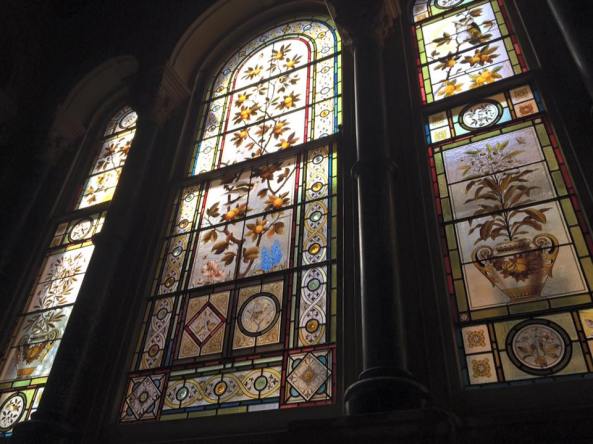 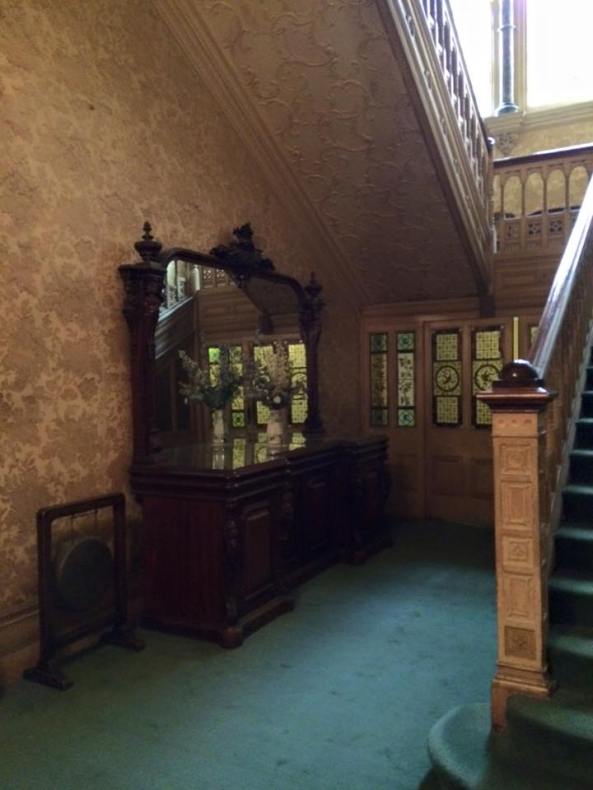 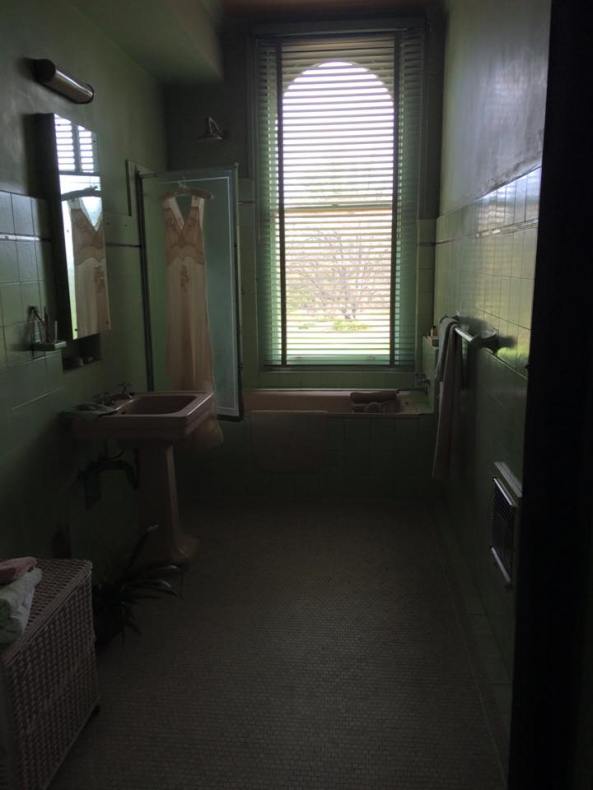 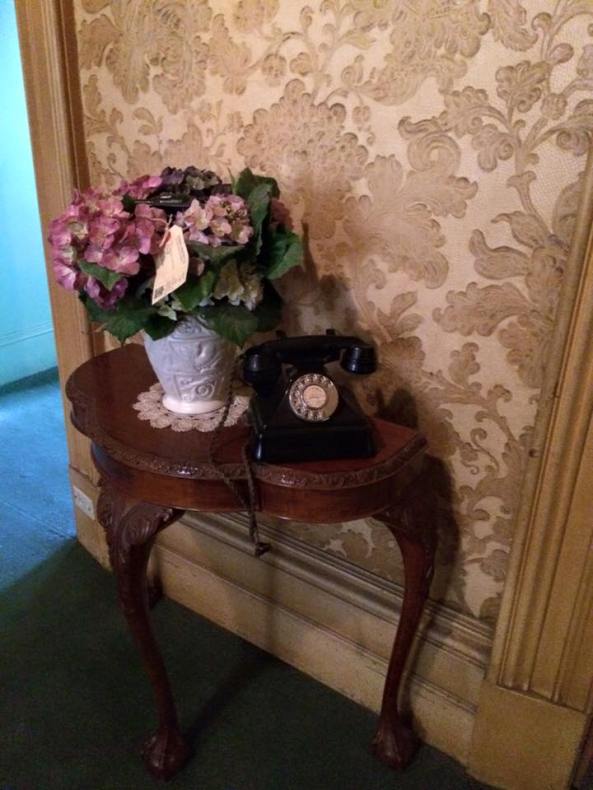 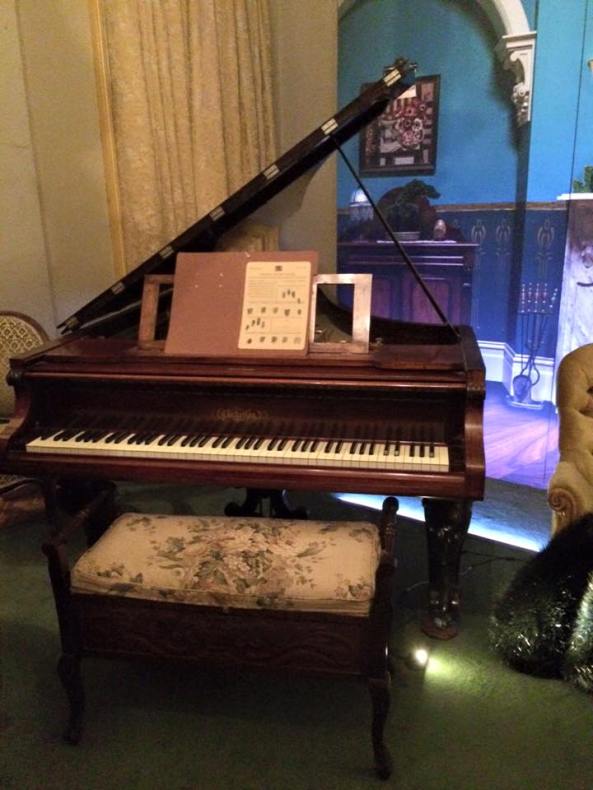 Spent the day at the Werribee open range zoo during the summer and took part in a special off road safari.  We had access to closed off areas of the park and the focus on the park is to save endangered species and educate the general public about them. 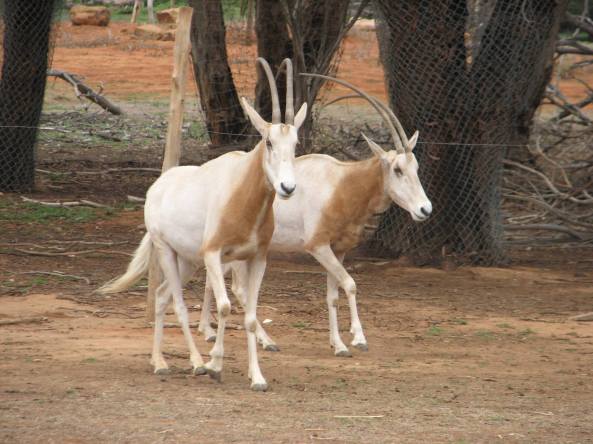 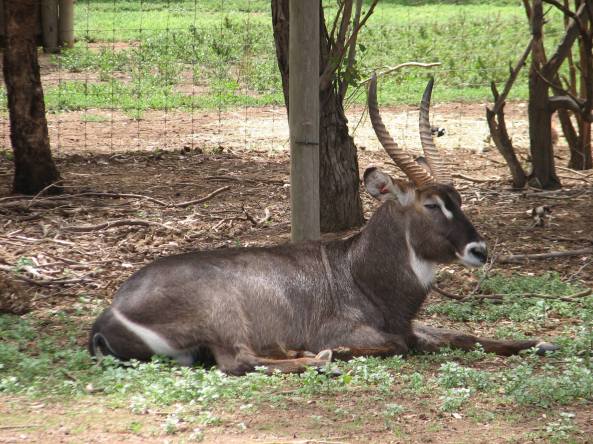 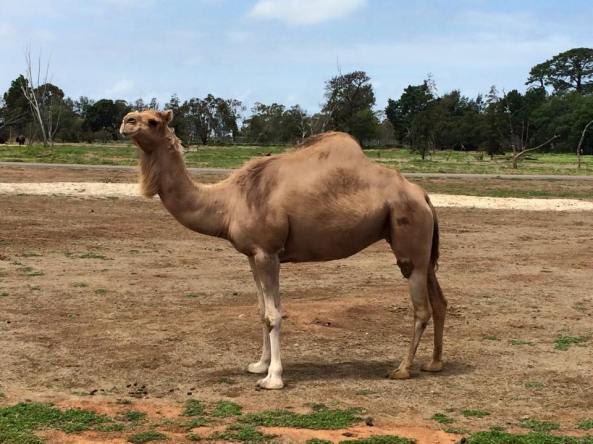 Like my obsession with paths found in nature, I also have a love of doorways or arches in a natural setting so I thought I’d share some of them: 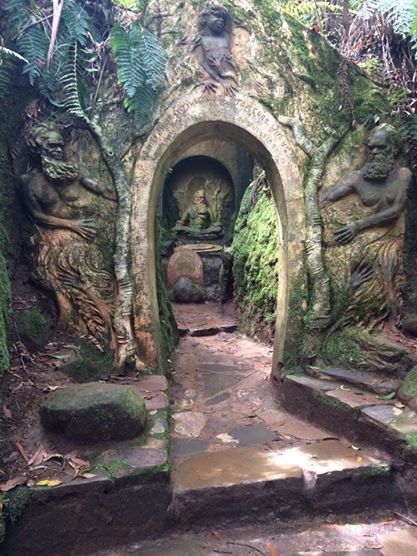 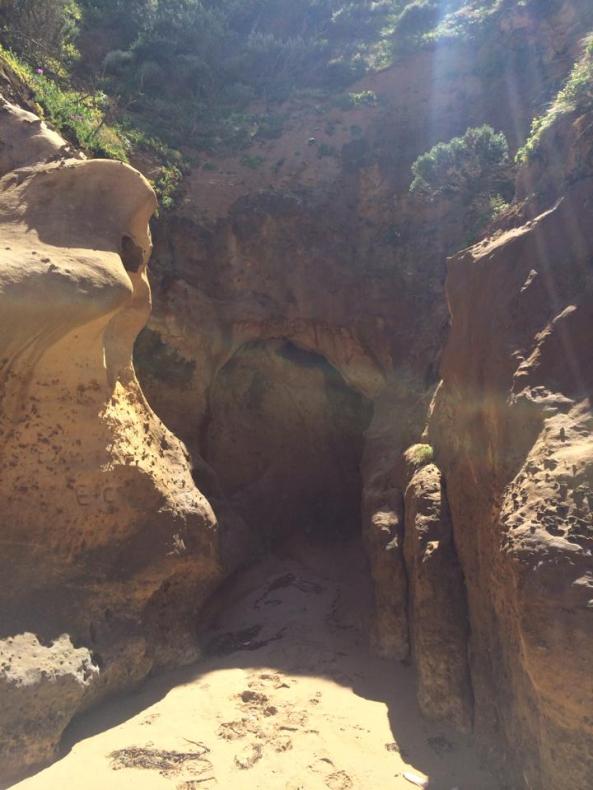 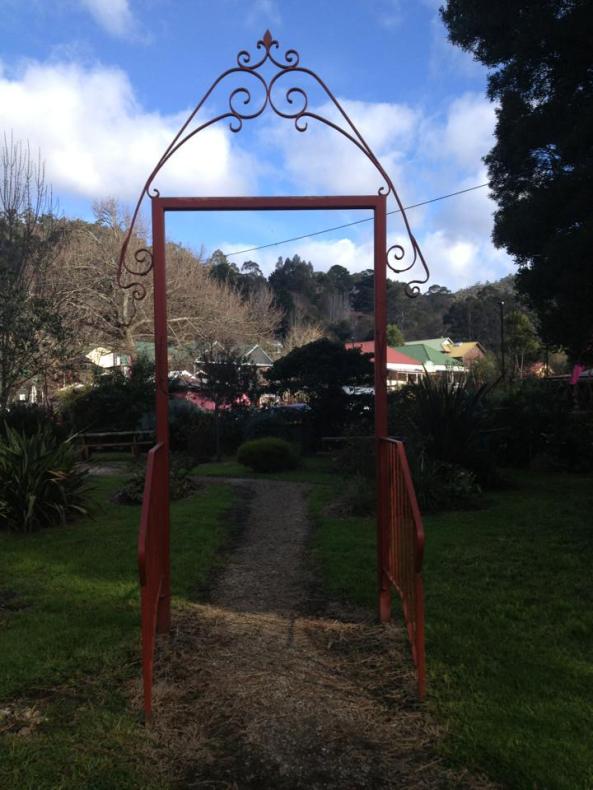 I’ve developed an obsession with paths found in nature for years now so I thought I’d share some of them: 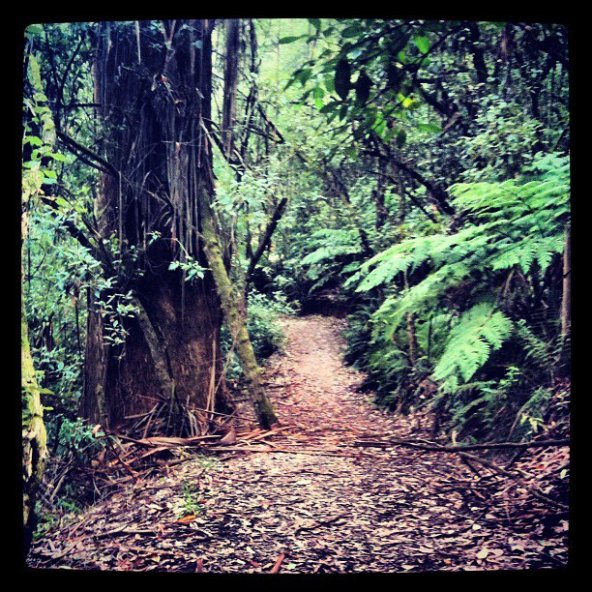 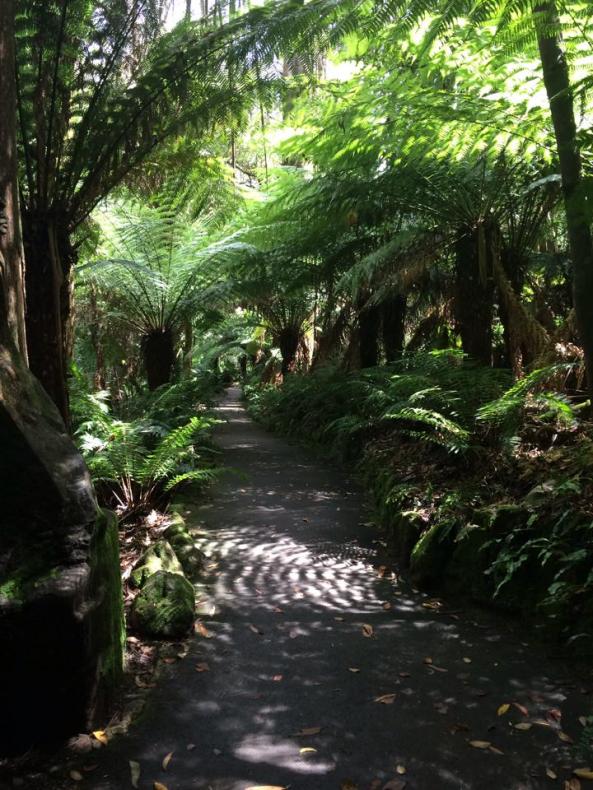 The Dandenongs – Between Olinda and Sky High 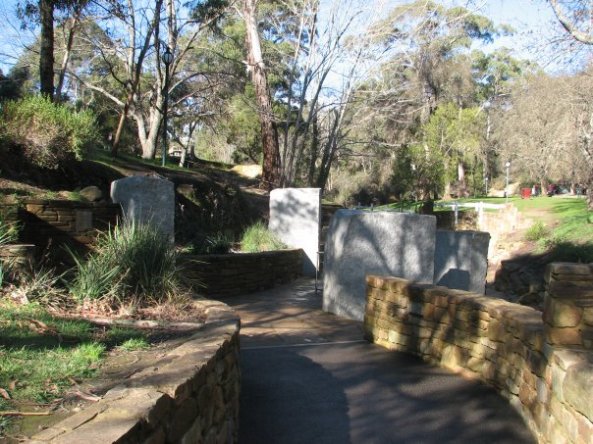 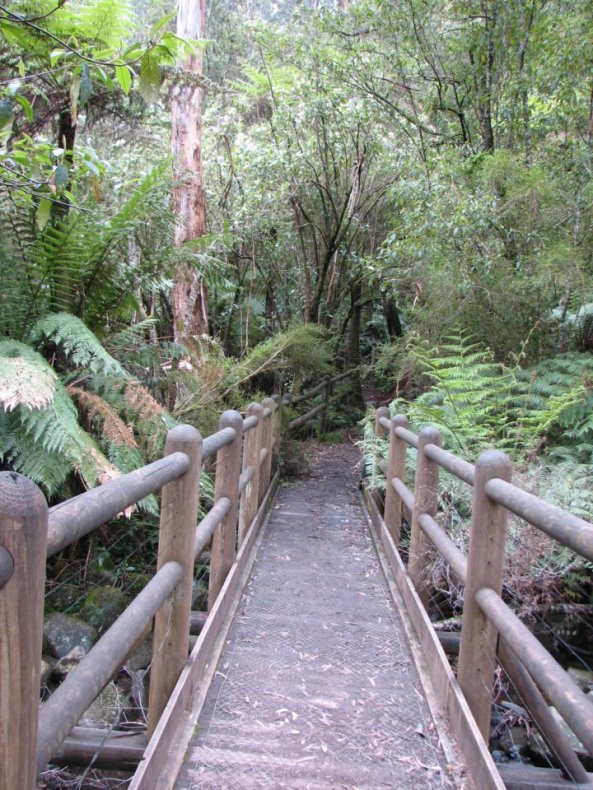 Having traveled several times down the Great Ocean Road  I still haven’t seen all its natural wonders in its entirety due to so many of its wonders.

The Great Ocean road is one of the worlds most scenic coastal drives located in Victoria, Australia which contains beautiful beaches and cliffs as well as lush rain-forests. 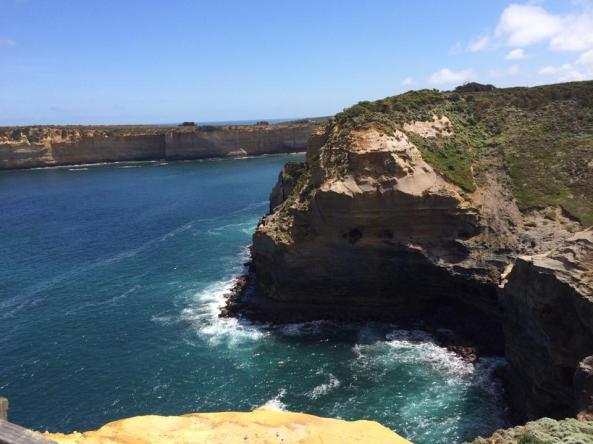 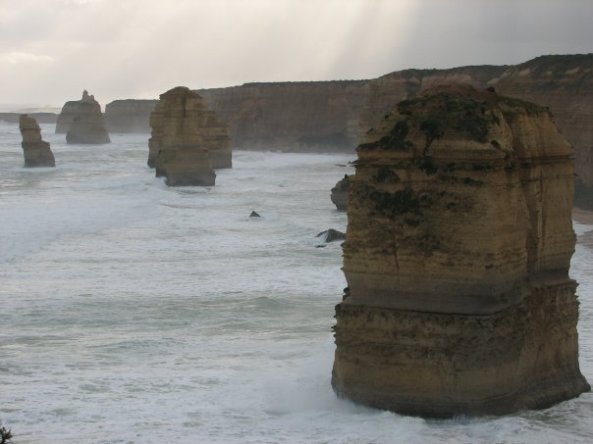 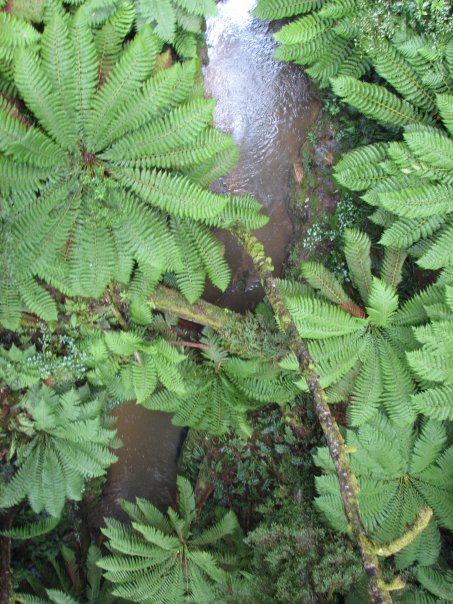 I love nature and one of my favourite things to do, is go up to the Dandenong Mountains and explore the national parks.

A few weeks ago I visited William Rickets Sanctuary which contains many mystical sculptures, immersed in the natural forest. 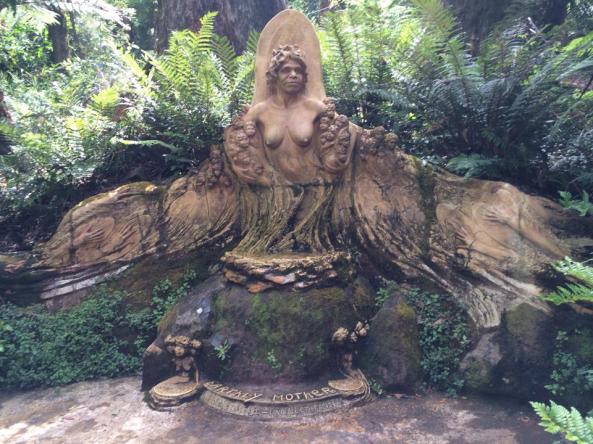 William Ricketts was an untrained Australian potter and sculptor who devoted a large part of his life creating Aboriginal centric sculptures to blend in with the natural landscape he placed them in, whilst sending the message to respect nature. He sepent 11 years traveling to Central Australia to be with the Pitjantjatjara and Arrernte people who vastly inspired his work. In the 70’s he spent a few years in India where he developed a love and empathy of their spirituality and philosophies which can be seen in his work.

In 1934 William purchased the land now known as William Ricketts Sanctuary and named it Potters Sanctuary. He worked on various sculptures and works in this sanctuary until 1993.  In the 1960’s the Victorian Government bought the land from him and turned it into a national park and renamed it William Ricketts Sanctuary.  William remained its primary resident and continued his work until his passing in 1993. 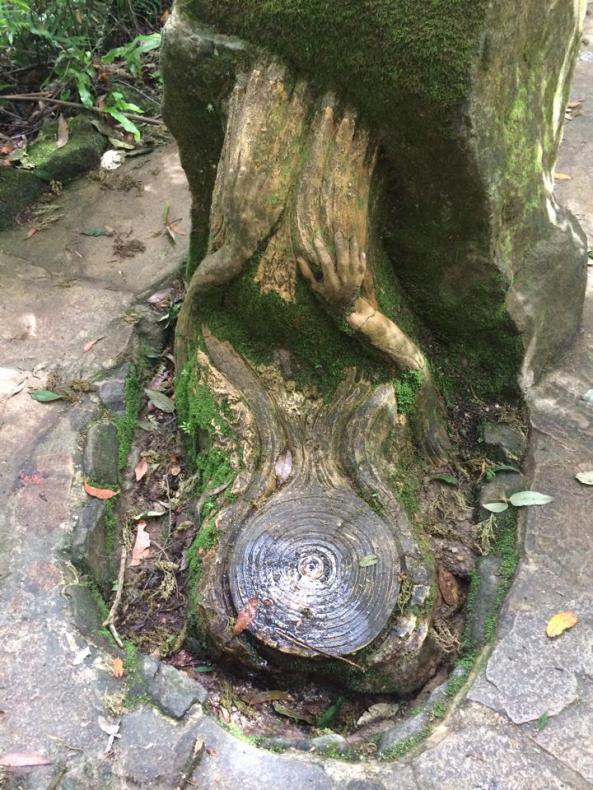 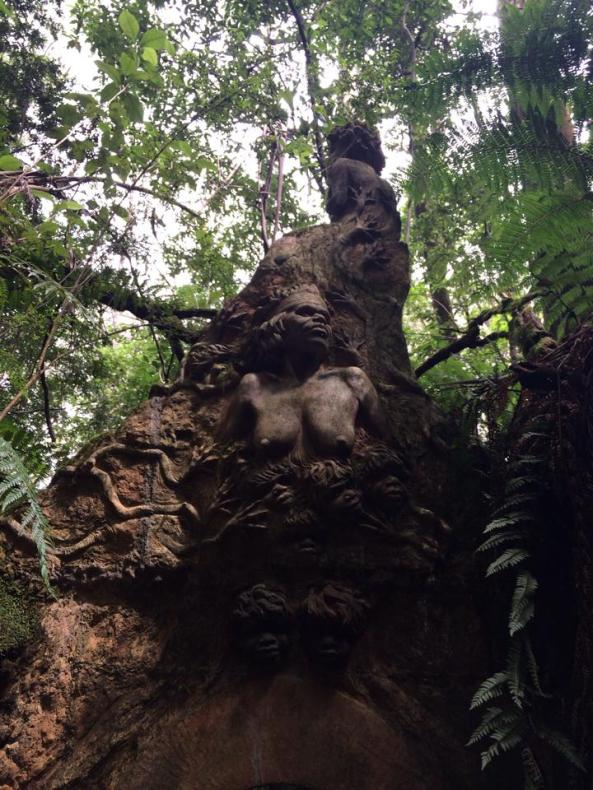 I found the place full of calm contemplation and it was very serene (even though the Dandenong main tourist road is just below it). The few tourists who were there at the time were very respectful and it was easy to navigate around the various paths and view the artwork. 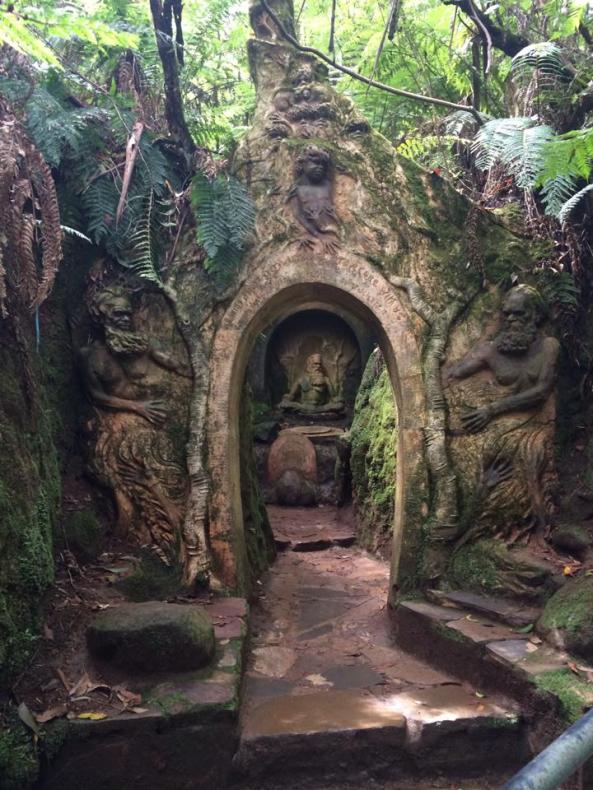 The whole place vibrated with a rich earthy power which refreshed and centered me.  I felt many devic energies around and as though I was in another plane of existence.

I especially loved how the sculptures take into consideration the natural surroundings and provide various watering holes for the native animals and birds who live there.

William Ricketts was an amazing artist who had a deep spiritual core which resonated in his work.  I am thankful that his legacy and message to respect nature and indigenous cultures lives on through his work. 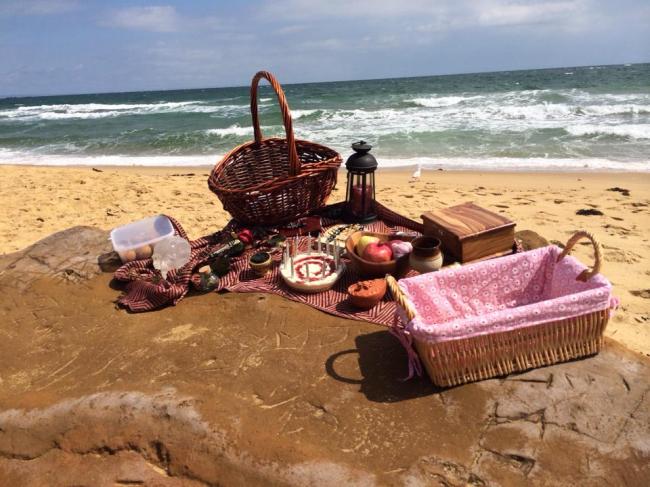 Hekatesia public rite was facilitated by me as Torchbearer for The Sanctuary of Hekate’s Crossroads within the Covenant of Hekate on Sandringham beach (SE Melbourne, Australia), Saturday 16th November 2013 to coincide with the modern Hekate festival of the “Day of Hekate”.

Upon the rocky outcrop which served as shrine there was my sanctuary statue of Hekate adorned with her magickal necklace, organic: olive oil, milk, honey garlic, apple, pomegranate, onion and barley with sacrificial blade, libation vessel, incense burner with special Hekate blend I made for the day, sea water khernips, cheesecake amphiphon, lamp with a pomegranate scented candle, non alcoholic wine, Hestia oil lamp, magickal keepsake box made ethically and environmentally from native Cyprus, gifts from sanctuary members including shawl/altar cover and crystal beads as well as offerings from attendees which included personalized hymns, flowers from their garden, jewelry, journals, crystals including skulls, animal bones, herbs and home made molasses cookies.

It was a beautiful day lit up with wonderful sunshine which warmed us whilst the wind whipped waves upon the ocean, provided a natural soundscape.  Just over a dozen came to the ritual, some whom have travelled hours to get there from across the state and which I was very appreciative of.  Halfway through the rite a further handful of latecomers arrived respectfully and didn’t disturb the ritual in progress but engaged with us at Agape.

All attendees chatted briefly and exchanged pleasantries before they lined up in procession to wash their hands to remove miasma (pollution) with the orange blossom water mixed with rose petals khernips I had placed in a acacia wooden bowl outside sacred space.  I then created sacred space in the Hellenic way which included certain ritualistic gestures, words and actions before the procession made its way within the sacred space and stood before the shrine in a crescent.  More purifications were made along with the offerings before I blessed and purified the offerings upon the shrine.  Since this is a regular part of my own practice I was delighted to be able to share it with other Hekate devotees and the whole time I was enacting it, I was filled with an ecstatic love and joy.

Next came the symbolic lighting of the hearth flame of Hestia and hymn to Hestia by the lovely Cosette complete with libation.  Then came the laying of the flowers before the shrine and hymn to Artemis by the lovely Tania also complete with libation. For Hekate I lit her symbolic lamp and recited a hymn to Hekate, offered some incense and reblessed the offerings as well as the wine libation to be shared with the attendees.  During this time I asked those who had anything they wanted to share with their fellow devotees within this sacred rite and Adam, Rach and Elspeth all shared their heart felt hymns which they had written to Hekate and which blessed, touched and inspired.  During this time the sea had began to beat upon the shore in louder waves of fevered rhythm and the sun burst through the last remaining clouds to illuminate us in a haze of glorious light which intensified as the ritual progressed.

The ritual was continued with a round of libations individually given to each attendee in their own cup to either drink from or offer to Hekate for each Goddess in turn.  We all went down to the liminal place between the shore and the sea which was behind the shrine and made our personal prayers, offerings and meditations before we all reassembled before the shrine and wound the ritual down into closing.  I thanked Hekate for her attendance with some chosen words and more libations and Tania and Cosette followed suit with words of thanks and the last libations to Artemis and Hestia respectfully.  Afterwards the attendees and I went across the road for Agape at the local pub and indulged in our own libations of sorts.

It was a fabulous day and I am honoured to have held this ritual in Hekate’s name and I am deeply appreciative of those who travelled long and time consuming distances and attended, assisted and participated and shared of themselves (special mention to Colette and Tania for your devotional assistance in the rite and to Adam, Rach and Elspeth for sharing their personal hymns) and of course to Hekate herself for bestowing her presence and her blessings.

The Sanctuary of Hekate’s Crossroads