Four Thieves Vinegar also known as Prophylactic Vinegar or Marseilles Vinegar/Remedy, is a health tonic made from vinegar, herbs, spices and garlic which was created in the middle ages to protect against the plague (black death).  Similar concoctions have been made as far back as the time of Hippocrates in Ancient Greece.

The basic recipe for the remedy is adding certain herbs to be placed and steeped in a vinegar solution for several days.

In the current climate of Corvid-19 it can be used as powerful disinfectant. 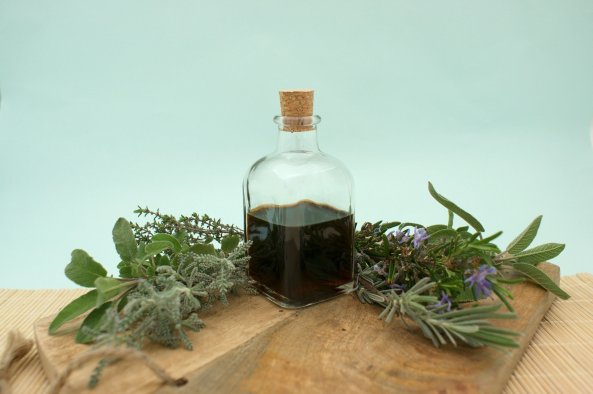 I created an original recipe several years ago.  This recipe is based on a medieval recipe and has modern ingredients added which I personally found useful:

Simple Use for Four Thieves Vinegar

Use as a disinfectant or house cleaning agent.

Cautions
DO NOT TAKE INTERNALLY!
DO NOT USE IF PREGNANT OR LACTATING!
DO NOT USE/TAKE IF YOU HAVE ALLERGIES TO INGREDIENTS MENTIONED!

Recently I created an amended version of my Four Thieves Vinegar in dedication to Hekate which I made in conjunction with a prayer for plague protection I wrote in honour of her.

My suggestion is to repeat the prayer before you start making the vinegar, after you have created the vinegar and left it to steep and once again after you have decanted the final product, once it has been strained.

Here is my recipe for the Hekate’s Four Thieves Vinegar:

Cautions
DO NOT TAKE IF PREGNANT OR LACTATING!
DO NOT USE/TAKE IF YOU HAVE ALLERGIES TO INGREDIENTS MENTIONED!

Here is the prayer I wrote for Hekate to go with the creation of her vinegar:

I call to you as Averter of Evil

Keep this virus away from me (and my loved ones)

I call to you as Helper

I call to you as Guardian

Guard me (and my loved ones) against Corona-18

I call to you as Bestower

Bring to me (and my loved ones) health and vitality

I call to you as Guide

Assist me (and my loved ones) during this difficult time

I call to you as Saviour

Be there for me (and my loved ones)

Khernips which is also known as lustral water is blessed or sacred water which is employed in Hellenic rites and can be used in the devotional workings of Hekate.

Khernips is primarily used for libations, offerings and to purge oneself of miasma (environmental and energetic pollutants believed to cause illness by the Ancient Greeks and modern Hellenes).  It can also be used to heal body/mind/spirit/emotion and can be consumed for internal use or applied externally (depending on the properties).

Khernips can be employed to bless or consecrate anything from shrine/altar tools, jewellery and places of practice, to plants, people and pets.  Washing one’s hands with blessed water before entering into ritual was common practice for the Ancient Greeks as it was believed to keep miasma at bay.  Khernips can be also used to put out a ritual fire, to wash ritual clothing and for use in practical and ceremonial magic, such as where one creates objects for specific purposes like a talisman from clay and water.

The Ancient Greeks made their khernips simply by collecting it from a sacred spring or well and storing it in a jug or similar vessel for devotional use.  The same technique can be employed now, however if you are collecting from a spring, be sure to leave an appropriate offerings like coins, flowers or herbs.

Another way to make this sanctified water is as easy as colleting rain water and purifying it.  My favourite technique of making khernips is collecting sea water. This can be ritualistically done by placing the vessel just on the shore line and collecting the water through a wave as it comes towards you. Several other methods of khernips I have successfully used over the years includes: mixing kosher rock salt and purified water, herbal/flower water (orange blossom, lavender, rose and angelica for Hekate), aromatherapy water utilising cold pressed essential oil and another method is purified water mixed with wine (sweet pine wine or any robust wine).

The way you can use khernips is by placing it in a glass lidded container for storage and then pouring it into a bowl or jug for ritual use.  You can then dip your hands into the bowl or alternatively pour the khernips over your hands from a jug to purify yourself before rites.  Use a bundle of tied up herbs to asperge* with or alternatively use your hands to sprinkle it over things like offerings, tools and sacred space.  Also putting khernips in a spray bottle to be able to diffuse it within an area works very well, as does using a water bottle or a bottle with a dripper. Some khernips, especially those having plant materials, need to be refrigerated or alternatively a preservative needs to be added such as a dash of wheat germ oil, olive oil or pure alcohol to keep it from going rancid.

This is a simple khernips creation and blessing I created as part of my regular devotional use for Hekate which I would like to share:

Light the end of a dried bay laurel leaf and say:

I banish all that is unclean, corrupt and profane with the aid of Hekate!

Plunge the lit end into the water and say:

It is purified, upright and sanctified in Hekate’s name.

You can employ the same method by holding some rock salt over a bowl of water, sprinkling the rock salt over the water and finishing off by swivelling around the mixture in the bowl with both hands.

*Asperge = to sprinkle with sacred water.

In my next regular Hekate column in Issue 4 of The Australian Pagan Magazine I discuss khernips/blessed water and how to make it.